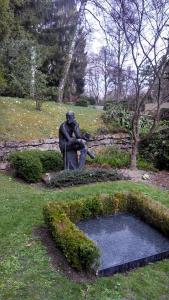 Grave of James Joyce, in Fluntern district of Zurich

Some people ask, “What would Jesus do?”  On this June 16th, I find myself asking:

“What would Molly Bloom wear?”

Yes, she would; yes, she would dare — and not be afraid to admit it — yes, yes, of course, she would dare to wear yoga pants, or their street-style, skintight leggings equivalent. Out and about for all the world to see, inviting (but not caring about) lewd stares and silly comments and all the endless jokes at the expense of yoga pants, thigh gaps, and camel toes.

It’s in their nature slapping us behind like that on my bottom… I suppose because its because my bottom is so plump and tempting in my tightness he couldn’t resist the excitement and I excite myself sometimes it’s well for men all the amount of pleasure they get off a woman’s body were so round and soft for them always I wished I was one myself for a change just to try with that thing they have swelling up on you so hard and at the same time so soft when you touch it….

Even long dead in the grave, Molly’s creator still pulses with life.  So he won’t mind that for my solemn pilgrimage to his graveside I’m dressed so as to awaken him, make him hard again, letch and genius that he, James Joyce, undoubtedly was.  If anyone can, I can raise him from the dead, as my hips lead my legs the mile or so in a pilgrimage up the gentle slope to the bucolic graveyard outside Zurich.

….in this vale of tears God knows it’s not much doesn’t everybody only they hide it I suppose that’s what a woman is supposed to be there for or He wouldn’t have made us the way He did so attractive to men then if he wants to kiss my bottom…

…and how he kissed me and I thought well as well him as another and then I asked him with my eyes to ask again yes and then he asked me would I yes to say yes my mountain flower and first I put my arms around him yes and drew him down to me so he could feel my breasts all perfume yes and his heart was going like mad and yes I said yes I will Yes.

Leda and the Swan