In not-so-slutty mode, I seem to invite the most unwanted attention. 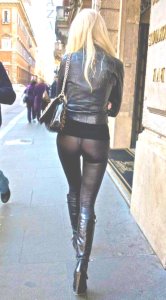 Yes, dress like the slut that you really are, and the catcalling jerks will be silenced. Sounds counter-intuitive, right?

But trust me.  I know — not just because I’m a self-proclaimed slut but because I’ve done several controlled scientific experiments out on the street.  In my professional-career-girl look, I provoke far more lewd comments and aggressive behavior than when wearing something short and snug and oh-so-revealing.

Maybe it’s something about a navy blue pencil skirt and matching jacket, with demure white blouse, that awakens the primitive urge in some men to defile and conquer?  The more seemingly unattainable the sex object, the more desirable she becomes?  Or since she doesn’t even look like a sex object, the macho male’s job is to unleash the sexpot lurking beneath the virginal, ruffled blouse and opaque hosiery?

But when self-consciously clad in the wildest, sexiest, even sluttiest outfits, I find most men that I pass on the street fall suddenly, dumbly silent.  (This is not to say the eye-fucking doesn’t persist!)

Maybe, as Jane Austen might have said, it’s a truth universally acknowledged that the guys with the loudest, biggest mouths have the tiniest, least effectual penises.  Here “tiniest” is a figure of speech only, for it is another truth universally acknowledged that size does not matter.  By tiny, I simply mean fearful and unsure of how to translate their offensive words into action.

Leda and the Swan